Welcome to our Learning Centre

Use our online documentation as a reference book to answer your questions.

The “gateway” perform the function of the translator: it allows communication between protocols of any type. A gateway typically consists of a physical device that converts various types of BUS (KNX / EIB, RS485, RS232) to Ethernet and a software part that interprets the protocol (KNX, Vimar, BTicino, Vivaldi, IRTrans, Modbus, UPnP). EVE allows to the actual operation of multiple protocols. Thanks to this ability, EVE can also be used as a gateway between different protocols, for example between KNX and Modbus or between KNX and Vimar making integration between different devices very simple.

here are displayed all the system gateways (EVE, MULTIMEDIA, WEB, GRAPHIC UI) available by default and all the gateways which you have specifically chosen for your project. Here is where all gateways of your project are displayed. Check out how to add and remove a new gateway. 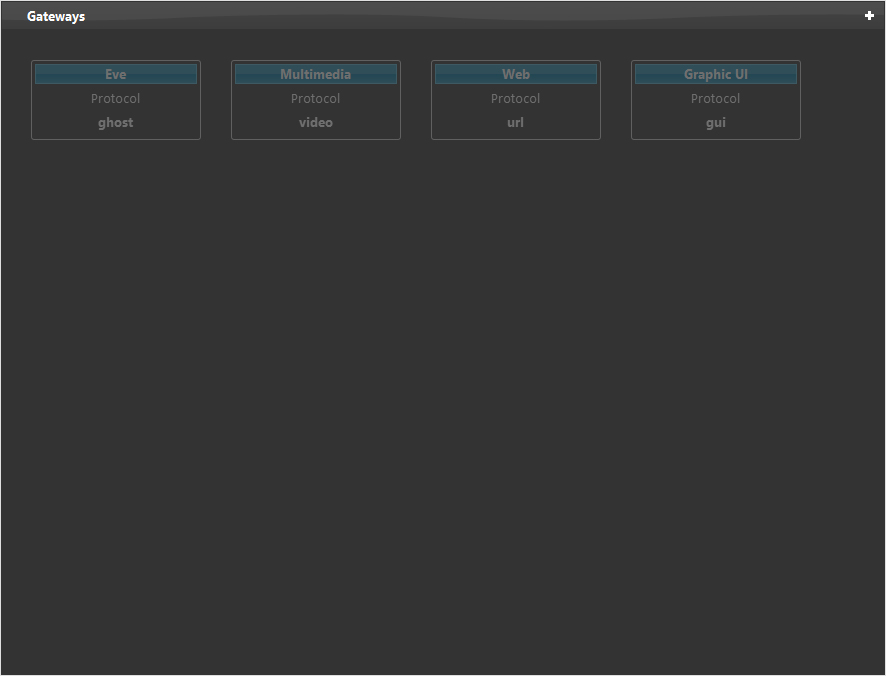 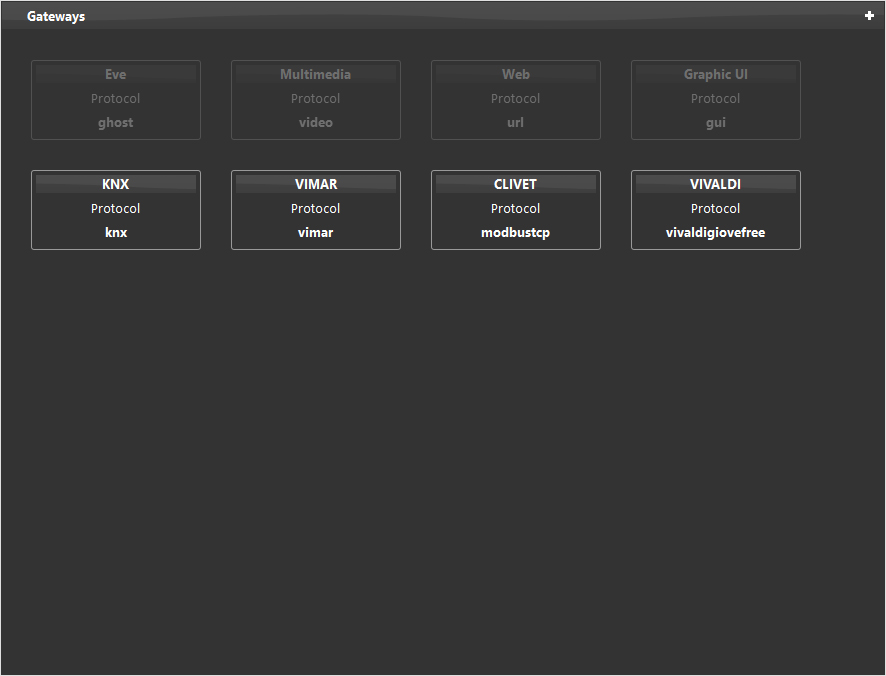 this area shows properties of the specific gateway selected on “Gateways” area. Here is where any gateway of the project is configured with its specific information. There is a common configuration structure to all the new gateways: it is asked you to enter a title to identify the new added gateway, choose the protocol from a drop down menu and then enable it to use. Other gateway’s parameters change depending on the protocol. Parameters can be edited at any moment. 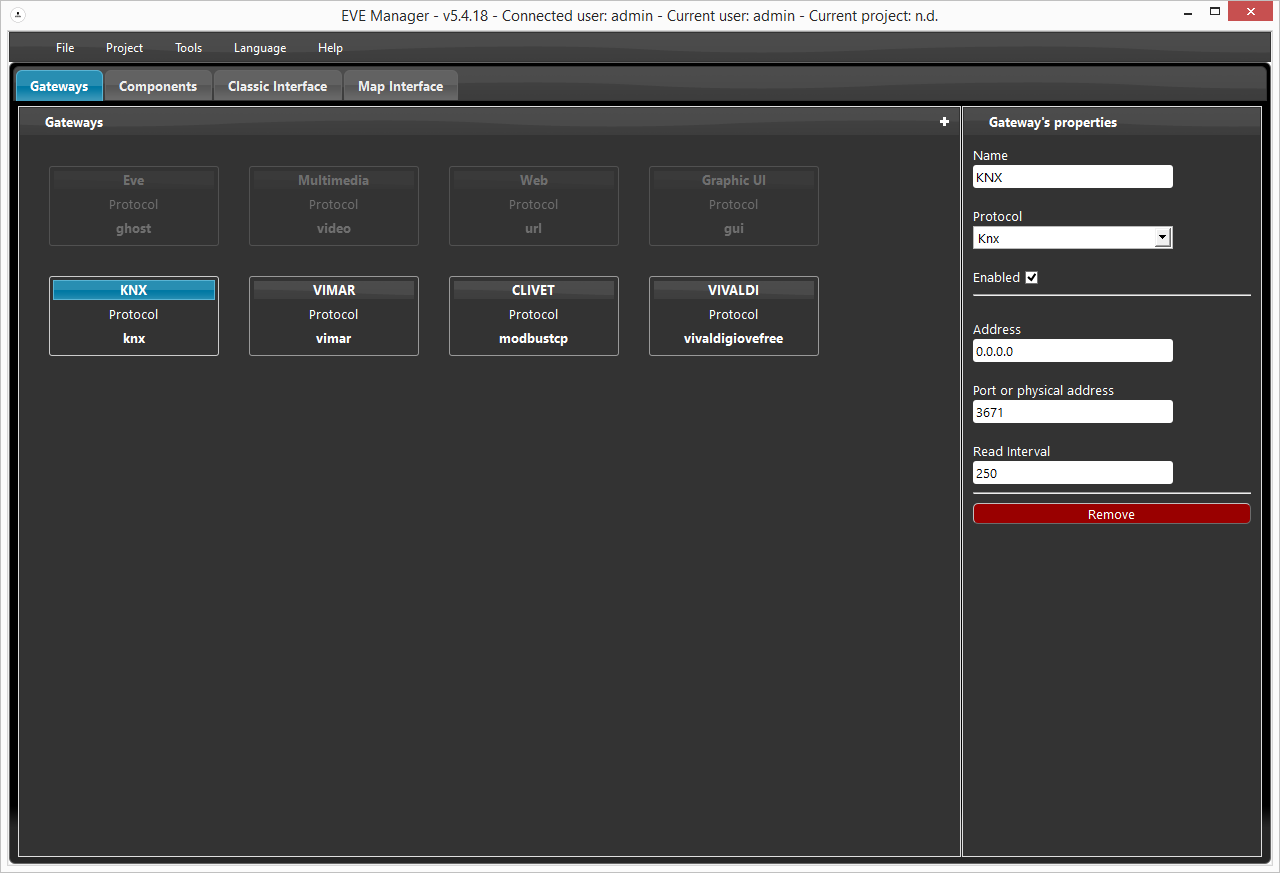 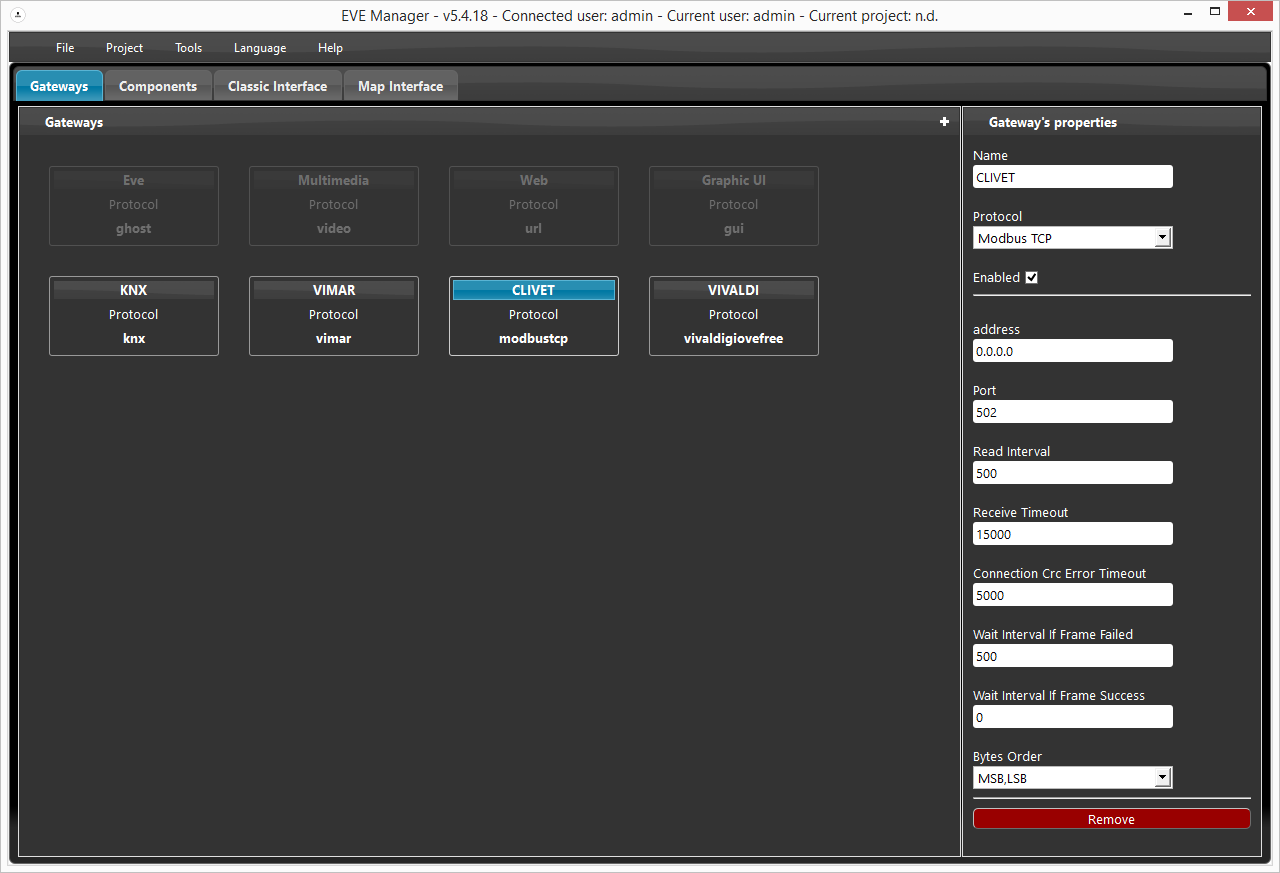 There are already four system gateways: EVE, MULTIMEDIA, WEB, GRAPHIC UI available by defaul which can not be removed. They allow the proper functioning of specific components such as IP Cameras, Images, Graphs, Browsers, etc.

For any component configured with Ghost Protocol does not match a real device in the physical world. In other words a component with Ghost protocol is a “virtual” component. Components used with this type of configuration are components with supporting function: they are created to be used in the EVE Remote interface or to perform calculations on the server. For example, a virtual Switch component can be used as input of a logic gate to enable / disable a sensor, or as an output to be used later in the IF component. Again, a virtual Info component can be used as output of Calculator component to display sum of several energy values ​​on the EVE Remote interface.

To date, EVE system has implemented several protocols (KNX, VIMAR, BTICINO, VIVALDI, MODBUS TCP, …) which allow to integrate many different systems together. Any protocol require a specific configuration, this is why we provide a brief description of all the available protocols and then get further information on the dedicated web pages.

Here is a list of all the available protocols yet implemented:

To connect the system to the KNX bus it is possible to use IP Gateway -> KNX. In this case, it is necessary to enter the IP gateway and the port used by the gateway parameters. If you use Raspberry as server, you can install additional devices that are controlled through a serial port or USB.

This protocol handles the Vimar By Me serie devices. Thanks to this you can use EVE as system integration between Vimar and other protocols such as Modbus (Clivet, Eurotherm and other heating systems) or other KNX servers. The settings are the same as for the KNX protocol.

OpenWebNet is the protocol used by BTicino for communication between devices of its brnad. Many of OpenWebNet devices are supported and also in this case we can integrate these devices with any other managed by EVE system. For connection you need a device with Ethernet port marked OpenWebNet such as MH200N o MH201 and indicate the IP address.

This is a communications protocol that allows you to manage devices supplied by Vivaldi. The connection with Giove is made via the network or through an Ethernet converter.

This is a communications protocol that allows you to manage Giove Free serie devices supplied by Vivaldi.

This is a communication protocol that allows you to manage the control unit and alarms provided by the EL.MO group.

Thanks to this protocol we can control AVE devices and integrate systems with other protocols’ devices.

Thanks to this protocol we can send messages via UDP to devices that accept this type of control.

It is possible to send HTTP messages to devices operating through this type of call in order to control them.

This is one of the most widely spread protocols (coming from RTU evolution) used within the control of heating/air conditioning. However, there are many other types of devices that use the same protocol. In case of TCP devices, it is not necessary to use either converters or adapter.

This is one of the most widely spread protocols. When using RTU / ASCII devices it is necessary to use a serial server converter to act as the master and control devices connected to the bu

Z-Wave is one of the most used protocols for wireless automation.

Our suggestion for your next lesson:
MULTIUSER MANAGEMENT
This site uses cookies and similar technologies to provide you with a better experience and service.
If you not change browser settings, you agree to it. Learn more I understand